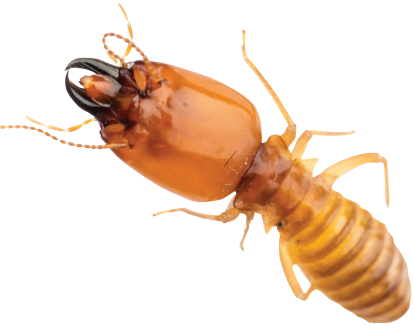 Termites, commonly known as ‘White Ants’ are a small white, soft-bodied social insect. There are over 2300 species of termites with only around 350 species found in Australia and only 12 of these are considered a threat to our buildings.

Although termites can be referred to as white ants they are not related to the true ant but still share some similarities as they both live in a colony and feed together. Each have queens and males used for reproduction with workers and soldiers whose duties can include gathering food, building and defending the nest.

Termites can be considered beneficial to the environment as they feed on waste vegetation such as wood, grass, leaves, fallen trees etc. They also aerate the soil and create hollows within trees and logs for other animals such as birds and mammals to make a home in.

Unfortunately, termites cannot determine the difference between a tree and your home and in as little as a year undetected and untreated termites could destroy your home or cause significant damage running into the tens of thousands.

There are a few things as a property owner you can do to help protect your home such as removing all timber in contact with the soil, eliminating water sources such as dripping taps and high moisture areas in sub floors etc. Early termite detection can be obtained by having our professional technicians carry out regular inspections which can save you thousands of dollars in repair works caused by undetected termite damage.

If you suspect termites, don’t delay, call our experts today

While Termites are our specialty, we’re experts in controlling all general pests including Spiders, Cockroaches, Rodents, Ants and more. Don’t leave your home and the safety of your family in the hands of amateurs. Our fully licensed and highly trained. 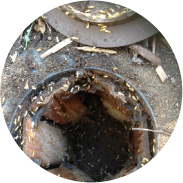 In-ground stations containing timber are installed around the property and areas in which termites are foraging for food. Temporary Above ground stations are applied to areas in which active termites have been found, after termite’s eradication is achieved these stations are then removed. If termites are detected in the regularly monitored in-ground stations, Termite bait is applied without disturbing the termites. The termites slowly feed the bait back through the colony which die gradually and eliminates the entire colony. Although this is a lone termite treatment there is no guarantee that termites will not enter your property and regular inspections are still 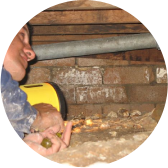 Termiticide is applied to the soil around the exterior and also in the accessible sub floor areas under a building. If termites come into contact with these areas, they are either repelled or killed before any damage can be done. This is not a complete treatment if full access to the sub floor area cannot be gained and other treatments may be required. Although this treatment can last a few years if not disturbed these chemicals do break down over time and regular inspections are recommended and all limitations should be eliminated if possible. 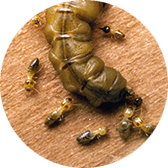 Termite dust is applied to areas in which active termites have been found but no nest. The dust sticks to the soft waxy skin of the worker termites which then transfer it back to the nest and spreads onto the other termites through grooming and feeding habits. As these types of chemicals take a few days to take affect it allows time for it to further spread throughout the colony. When termites die, others will feed on the dead carcases further affecting the colony until complete elimination has been achieved. To ensure colony elimination is achieved regular inspections and monitoring of the property is highly recommended. 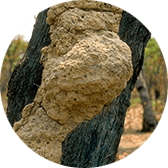 Pest Alert Technicians are highly trained in the location and elimination of termite nests. Sometimes nests are as obvious as a soccer ball sized dirt mound which can be dug up and treated however, by test drilling nearby suspicious trees and stumps we are able to determine if the attacking termite colony is concealed. If a nest is found a termite treatment can be applied through these drill holes. These test holes are carried out to do the least possible harm to the tree and it is highly unlikely that these test holes will kill the tree. This method is used to treat the nest directly.

Identification can be difficult however soldiers have no teeth on their mandibles and a yellowish pear-shaped head when disturbed will secrete milky fluids from the front gland.

These types of termites are considered the most destructive of all species in Australia. Feeding on all types of timber structures, ornamental trees and fruit trees. Around the home they have been found in stumps, sleepers, poles, or other areas in which they can access from the soil. Although soil contact is preferred it is not essential as long as they maintain a safe moisture supply.

Did you know: In a Sydney hospital, Coptotermes had so severely damaged the electrical wiring, it  caused a black out in a large and critical section!

These soldiers have rectangular heads with no obvious teeth on their dark mandibles.

These multi-nest building termites are often found attacking poles, fences, posts, decking’s and flooring in which decay is present. Heterotermes have small colonies which have been previously shown to pose very little economical significances however new studies indicate that they can cause serious damage structural timbers on your property.

This species is typically found north of Port Macquarie following well up into QLD. They build nets on posts, poles and above and below the ground. The soldiers have long mandibles that when view from the side, do not curve. Their heads have straighter sides than other species. Their working are usually distinguishable from Nasutitermes by being a paler colour.

Soldiers with nasute heads tapering to a long snout. Soldiers are smaller and more fragile than workers. In contrast, workers are arched and more heavily built in the front section. They also have two dark areas on the top of the head.

These group of termites are multi-site mound builders and can be found in sub floor areas, around wooden bridges, fences, poles and usually prefer hardwood timbers and sapwood. Other sub species have also been found in tree trunks or on the fork of a large tree branch. Nasutitermes will etch the surface of wood and damage timbers around damp and poor ventilation environments.

Did you know: It is important to destroy the nest after eliminating the termite colony as sometimes other colonies will occupy a mound after death of the original builders.

There are two types of soldiers, one with a bulbous head and a smaller type of a narrower head and more slender mandibles. These variety is similar to the Coptotermes however do not secrete white fluid.

These termites are multi-site nesters found mostly in dead or fallen trees and timbers. They form nests in the ground and areas under houses and prefer areas under fire places, patios etc.

Did you know: These species are second to the Coptotermes in relation to property damage and the strength of the nest is determined by the number or soldiers present.

Only found in the Northern parts of Australia like Darwin, this termite is large and has barely changes over a million years.

It mainly builds subterranean nests in tree stumps and the root crowns of trees.

Their first body segment is lobed at the side. The soldiers have a large head with large sharp mandibles.

Individually, they are the most destructive termite in Australia. Coptotermes only beat them out due to being more widespread.

Did you know? Termites are closely related to Cockroaches. Mastotermes, with limited evolution in over a million years, are the closest.