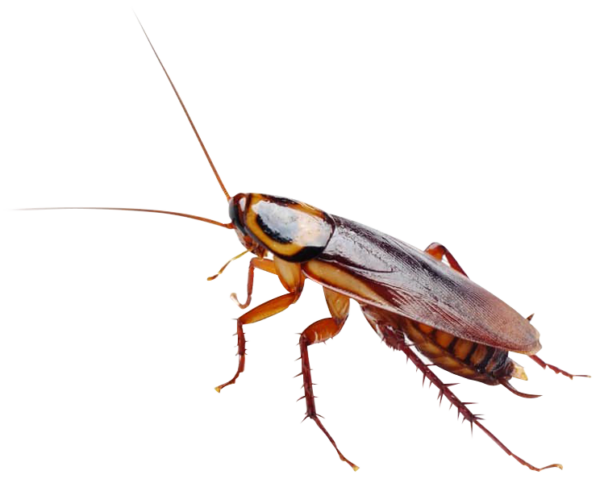 Cockroaches are one of the most hated and widespread pest found in houses, restaurants and commercial properties. Sometimes even the cleanest home can develop a cockroach infestation.

Cockroaches are a nocturnal creature and will only come out when disturbed during the day. They like cracks and crevices and warm damp environments. Unluckily for humans, ‘roaches have the ability to carry many diseases such as salmonella, dysentery and gastroenteritis which can be carried into your homes. Moulting occurs a few times a year and their discarded skin has been known to cause asthmatic reactions in some individuals. There are many different types of cockroaches which, their species deciding  where to find them and how to treat the infestation.

The German cockroach is 12-66mm long, pale brown in colour with two long streaks down its back. They are quite active and have wings but don’t usually fly.

American cockroach at 1.5-2 inches is the largest of the cockroach species. Brown and reddish colour with a yellow band after its head.

Growing to about 30-35mm long with a yellow boarder behind its head, the Australian Cockroach usually exhibits a dark reddish brown colouration with light markings on its body. Wings cover its body.

Cockroaches like cracks and crevices to live where they can touch the top and bottom of their bodies. They stay in their hiding spots only to leave in search of food, water and for reproduction. As cockroaches like to live in numbers they readily come into contact with each other which can assist in treatment of large populations. When treating cockroaches you can assist in creating it less inviting for them to take up residence by sealing all gaps and removing food sources.

Unfortunately a single cockroach treatment will not eliminate the entire cockroach infestation and can take a few days to notice a change. A plan needs to be put into place to rid them from your property. It is important to assess the problem areas in your property, the type of cockroach, how large the population and what products will be needed. Pest Alert will use a mix of different chemicals such as:

By using different combinations of treatments you are able to target the different stages of the cockroach lifecycle. This helps eliminate the current population and also stop the eggs from hatching and starting the process again. However once a treatment is carried out if you clean out the areas where the technician has applied chemicals, the treatment will become ineffective. Best practise is to empty and clean these areas prior to the technician arriving.